The whispers and murmurs of secession grow with each passing year, with the scenarios making it onto mainstream publications on a steady basis. Polling firms are even asking if people want to secede now, and the ‘20s have just begun. This is partly because things get worse and weirder with each passing year, and partly because the voting Wurlitzer is not playing the tune the people have been programmed to expect.

Alternative solutions are being contemplated. One thing that mentally holds Americans back is the idea of states standing on their own. Regional breaks make sense and are easier to swallow. We saw a soft version of this during corona reopenings. Culturally or socially, Americans can see the drifting apart supporting secession but they still fear being too small to be independent. What many Americans fail to realize is the true size, scale and economic power of their states.

Independent American states compare remarkably well to foreign nations in terms of absolute GDP. The top half of US states would be top 50 internationally for GDP. Independent nations with clout make up that map. Cobbled together into regional breaks, rump American states would be powerful on an absolute GDP basis like G7 member nations. A hypothetical Dixie would have a top 10 GDP. A Midwestopia would be a balanced powerhouse. Competing for the English speaking population would force these regions to work more efficiently and provide better services for their citizens to entice membership. An interesting trick would also be what states would unleash economically if they did not have the Federal government to rely on for transfer payments? Do Oregon and Maine bring back the forestry and paper jobs that they voted away? How much growth is created by necessity?

Skeptics would scoff at the notion and laugh at the state-nation comparisons. This is easy to do for progressives as it would reveal cursory evaluation of the true numbers without understanding. Plus, the maps usually try to not duplicate nations used. The American states are far richer and more powerful than those absolute GDP comparisons reveal. The better measure to look at is GDP per capita. That is listed on the map below. When you look at those numbers, you see that all American states are incredibly wealthy compared to the rest of the world. The nations popping up there are duplicates and reveal wealthy countries like Netherlands, France, Japan, Italy, etc. When one looks at both measures combined (absolute and per capita), the numbers make independent states even stronger than progressive favorites in Scandinavia or even Asian Tigers. Similar to the absolute GDP measure, cobbling states together into regional states would create strong states able to compete on the global market for commodities. With the natural resoruce bounty of the continental United States, regions would be large players in a variety of important goods, services and basic necessities. All of this without the NYC-DC axis in control. 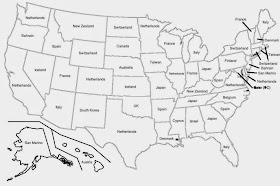 Each State With GDP Per Capita Sister Nation

Now there is a flip side to this. America’s FIRE economy skews some items as does the current federal regulatory regime. Some wealthy blue states are overinflated due to their reliance on real estate and finance. Another problem is that some blue states are no longer balanced with manufacturing, agriculture or natural resource industries and are service economies. When blue state pundits and even little people say America does not make anything anymore, it is really “my section of America got rid of our manufacturing”. Drive through the South and Midwest, one can see where manufacturing relocated.

While it is definitely smaller in size, the manufacturing in America is now more concentrated in specific regions. What happens if red states or even purple states remove the “degree for the good life” demand from education or physically remove populations that make the search for the good life/schools a driving force? The university system everywhere takes a hit. In a global view, universities are an export industry for the US, and especially for a state like Massachusetts. The states that grow food, generate raw materials and can remain competitive from a manufacturing standpoint oftentimes vote rightist and skew culturally red. A break up could reshuffle the current FIRE dominance and remove control of the bounty of the Lower 48 (and Alaskan oil) from the USG and paper shuffling elite.

That is part of the problem with secession ideas. Removing that control of resources from mandarins in the NYC-DC axis is a huge blow. Controlling the bounty that is the American geographic jackpot is the ultimate communist goal. Look around the globe. Few if any spots are as rich in minerals, oil, water and can produce the food that America does. I’m sure 100,000 Midwest farmers and Texas petrol engineers could turn Africa into an economic powerhouse, but they would still have to deal with infectious diseases and other natural problems not found here.

As one looks around the globe, the struggle of nationalist sentiment vs. USG globalist reach is really a fight over local control of their lives vs. the needs of the global cabal to control the commodities in that same region for their gain. To use a slogan from Wilson’s presidency, this is a struggle for self-determination that applies to us Americans. Keep talk of secession going. If anyone questions the reality of a state becoming independent, remind them of regional states that could form. If they are a true believer progressive, just remind them that Sweden is weaker independently than many American states. Let the talk continue and remind people that states and communities are stronger than they think. Throwing of the yoke of Harvard is as much a mental battle as it is the actual mechanics of government.